B vitamins, Homocysteine, Strokes & Heart attacks - Food for the Brain

Did you know that two out of three 3 in 4 heart attack patients don’t have high cholesterol and that two thirds of heart attacks in the elderly are predicted by high homocysteine? This is even more true for cerebrovascular diseases such as strokes.

Just to recap, roughly two thirds of dementia is called Alzheimer’s disease where there’s a specific degeneration on the ‘medial temporal lobe’ so you need a brain scan to diagnose it. Roughly one fifth of dementia is called cerebrovascular dementia, in other words, blocked arteries in, and leading to the brain. If you’ve got raised homocysteine, your chances of both developing Alzheimer’s and cerebrovascular disease is correspondingly high. 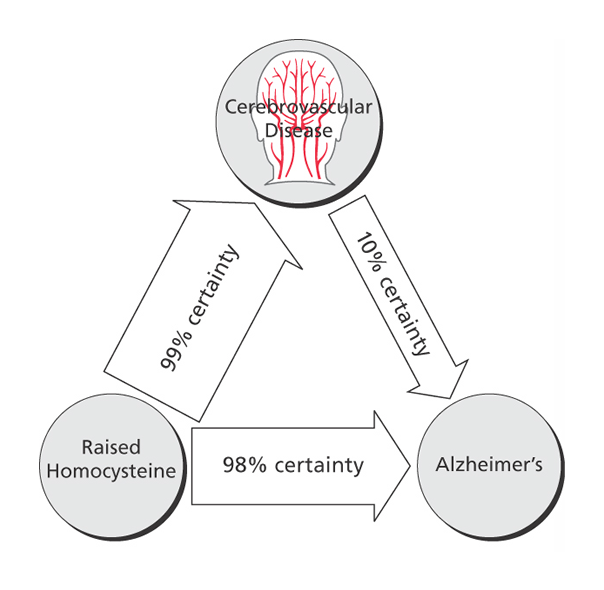 Fortunately, everything you’ll learn in COGNITION will give you the tools to help reduce both your risk for heart disease, strokes and, of course, dementia.

While normalising methylation, reflected by a healthy homocysteine level, is something that should always be checked in anyone with cardiovascular (heart) or cerebrovascular (brain) disease, it’s not only homocysteine that counts. In the diagram below you can see how the other domains, LOW GL, ANTIOXIDANTS and BRAIN FATS, all contribute towards brain cell death, but also arterial damage. 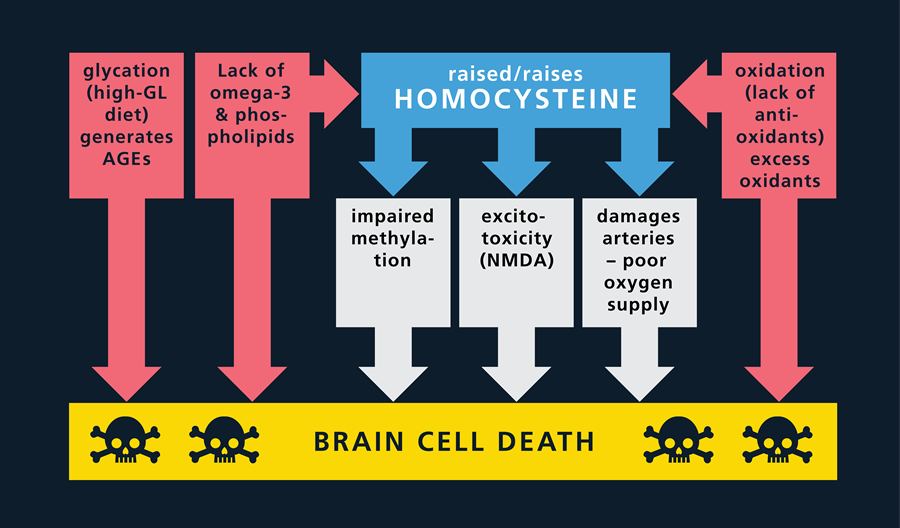 Heart disease doesn’t occur because of an ‘accumulation’ of cholesterol, as is widely believed, nor is it ‘cured’ by blocking cholesterol production with drugs. Blood fats accumulate because they are made from eating too many carbs (and/or alcohol), and put into storage as ‘triglycerides’, which is what’s measured in the blood.

Cholesterol itself gets damaged, both by sugar and by oxidants (think smoking and fried foods). Arteries get damaged by raised homocysteine due to lack of B vitamins. It’s a combination of these factors that lead to heart disease and strokes, as nutritional therapist Patrick Holford, author of Say No to Heart Disease, explains in this one minute film: The Real Cause of heart Disease