Genes or greens? - Food for the Brain

Many people think diseases such as dementia are ‘in the genes’. Many critical parts of your body’s biochemistry are made of proteins, which are assembled from amino acids in much the way a word is made of letters. Enzymes, for example, that turn one thing into another, are made from protein.

The order in which these amino acids are put together is encoded in our genes. In this ‘Methylation Explained’ film which you saw earlier, the boxes that say ‘MT’, ‘MS’, ‘MTHFR’ are the names of enzymes that turn one thing into another. Each had a ‘gene’ with instructions to make it. But here’s the rub – we don’t all inherit quite the same set of instructions to make these enzymes, making some of us more efficient at making these enzymes that others. These variations in genes are called ‘polymorphisms’. 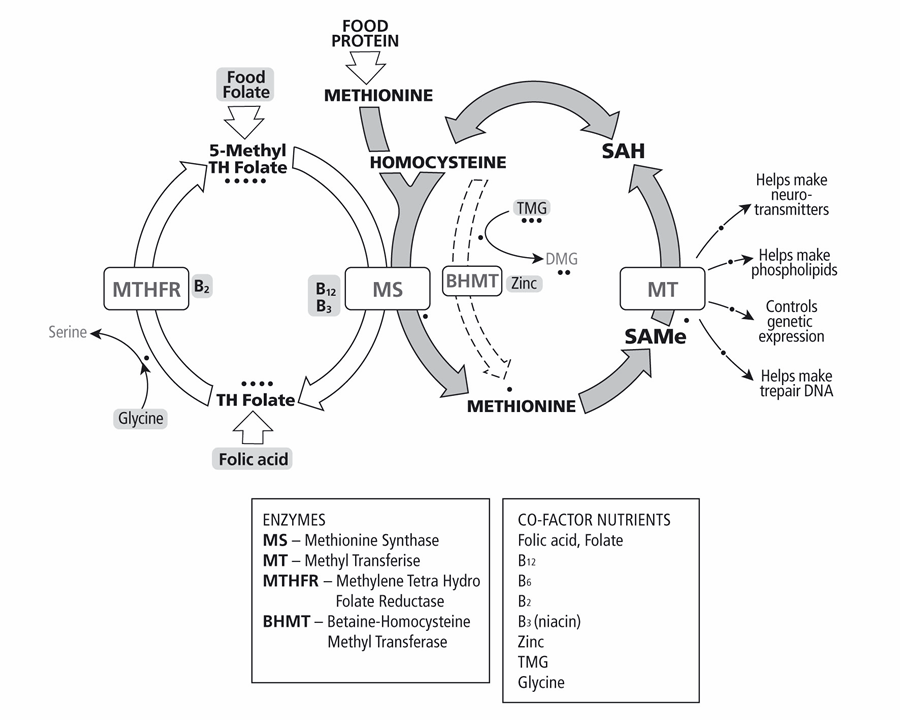 In the figure above, taken from the film, you can see all the methylation-related enzymes, each of which will have methylation-related genes and variations (polymorphisms) thereof. That’s what gets tested in a DNA test. One, MTHFR gene, for example, has a polymorphism (C677TT) which affects up to roughly 1 in 10 people, possibly reducing their ability to turn food or supplemental folic acid into the active form of this vitamin MTH Folate, resulting in up to 30% less production. This ultimately makes them less good at making SAMe the amino acid that’s the most important methyl donor in the body.

If you happen to inherit such less desirable gene variations, which can be tested for, does it mean you will have worse methylation, reflected by higher homocysteine? The answer is, theoretically, yes. But what if you supplemented enough of the right B vitamins? It looks like you can negate this weakness with the right intake of nutrients. But how much do you need? The answer is whatever brings your homocysteine level down. That is the ‘functional’ test that you are doing the right thing for you. So, ultimately, greens are more important than genes in
determining your risk.