The importance of phospholipids - Food for the Brain

The importance of phospholipids

Neurons – brain and nerve cells – are primarily made out of what is called ‘phosphorylated DHA’. This is DHA that is bound to a kind of fat called a phospholipid.

Seafood contains phosphorylated DHA, but DHA supplements, whether derived from fish oil or algae, are not phosphorylated. Hence, the DHA from a supplement needs to be attached to phospholipids to work. This attachment is achieved by a process using B vitamins called methylation – it’s a bit like using those glues where you have two tubes and have to mix a squeeze of one with the other for the glue to work. The ‘mixer’ in this case is the B vitamins in your body attaching the DHA to the phospholipids. If you have no phospholipids, or no DHA or B vitamins, the mix is not going to work. 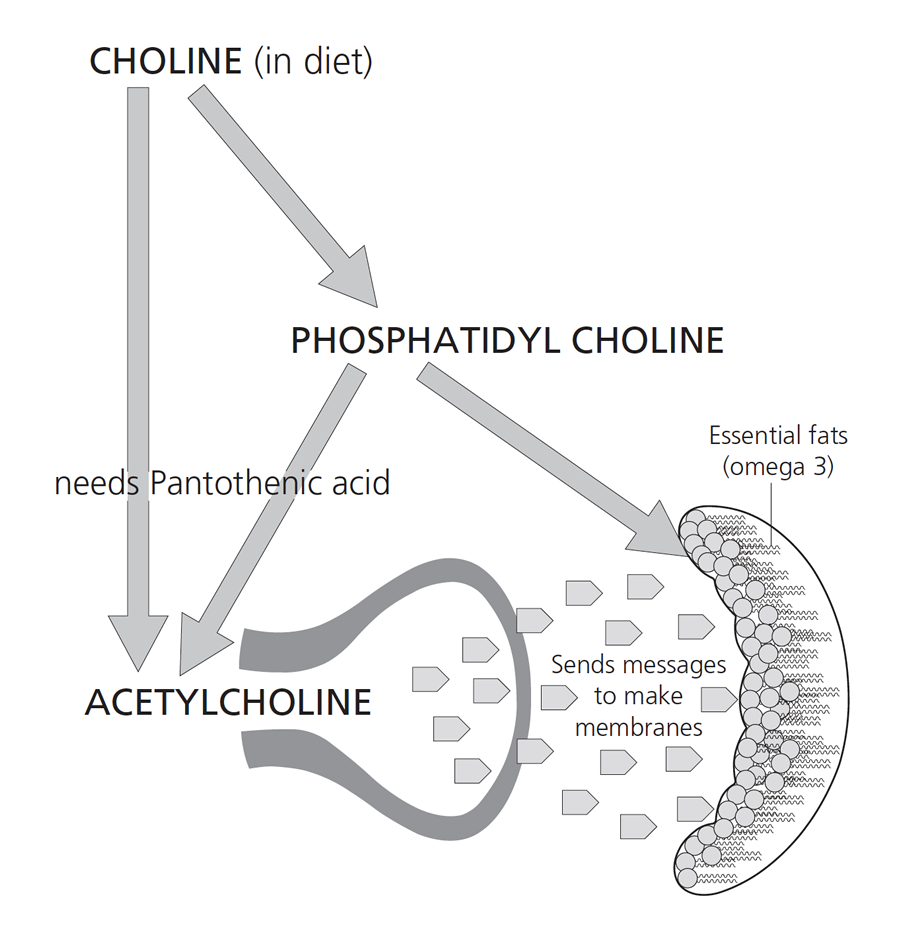 As a group of nutrients, they are classified as semi-essential because we can make some, but not enough, for optimal health and especially optimal brain health.

As a consequence, there are moves afoot to classify choline (which can be easily attached to the ‘phosphatidyl’ part) as an essential nutrient with a recommended intake. This has come about due to the growing evidence that insufficient choline in pregnancy leads to cognitive impairment and developmental delay.

This is particularly important for vegans because, like DHA, there’s not so much choline in plant-based foods, but there is some in foods such as quinoa, soya, beans, nuts and broccoli – which are also important foods for protein, as we saw earlier. (If you’re vegan we’ll send you an email shortly to let you know what to do).

Currently an adequate intake of choline is defined as between 400mg and 520mg a day, the latter amount for pregnant and breast-feeding women. This is based on how much choline you need for healthy fat metabolism, liver function and reducing homocysteine levels. You also need choline to utilise cholesterol in the liver and brain.

Cholesterol is a vital brain component but it has to be contained between the phosphorylated DHA. It’s like a sandwich. But these levels don’t take into account what’s being learnt about choline’s role in brain development. A good estimate of optimum daily choline intake would be at least 500mg and you could,  perhaps, double this in pregnancy. Choline is not included in most prenatal supplements, so this is something you’ll need to either include in your diet or supplement (see below).

Most important is choline’s role in building, and maintaining, a healthy brain. A pregnant woman’s intake impacts the cognitive abilities of their child. Twenty years ago, we knew that pregnant rats that were fed choline halfway through their pregnancy had more connections between brain cells, plus improved learning ability and better memory recall. Now we know that it’s also true for babies, with several recent trials showing similar results, indicating that more choline in pregnancy enhances cognitive development.

An example of this is a study where women in their third trimester of pregnancy were given either 480mg of choline or almost double this – 930mg. The babies’ information processing speed was then tested at 4, 7, 10 and 13 months.

Not only were the babies of the mothers who were given the higher dose faster, but the longer the mother had been given even the lower dose, the faster were the child’s reactions. The authors concluded that ‘even modest increases in maternal choline intake during pregnancy may produce cognitive benefits for offspring’. Seven years later, there will still memory advantages in the children whose mother had extra choline during pregnancy. Babies are born with blood choline levels three times higher than their mother, illustrating how vital this nutrient is for building neuronal connections, which new-born babies do at a rate of up to a million new connections a second! An optimal intake for brain function is likely to be a lot higher than the 400–500mg recommended for adults, and higher still in pregnancy.

Brain cells are made of a membrane containing choline (and other phospholipids) attached to the omega-3 fat DHA. Without choline, therefore, the omega-3 doesn’t work. The attaching of the two depends on methylation, a process that is dependent on B vitamins, especially B12, folate and B6. Choline helps methylation, and healthy methylation, indicated by a low blood level of homocysteine, helps to synthesise choline. You need all three – DHA, choline and B vitamins, especially B12 – so if you are lacking in DHA, or in vitamin B12, then you’ll be doubly dependent on getting enough choline.

By far the richest dietary sources of choline are fish, eggs and organ meats, but there is a significant amount of choline in plant-based foods as well, notably: soya, as in tofu and soya milk; quinoa; seeds, including flax seeds; nuts such as almonds; peanuts; and cruciferous vegetables such as broccoli, cauliflower and Brussels sprouts. 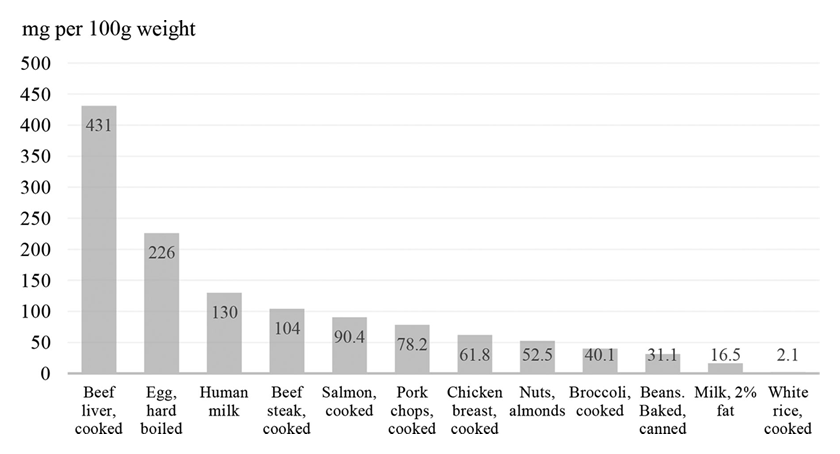 The long and short of it is that it is wise to eat eggs and fish, if not meat, to ensure you get enough brain-building phospholipids. All fish, whether white or oily, is a very rich source of phospholipids.