Methylation and Homocysteine - Food for the Brain

Homocysteine is a naturally occurring amino acid produced as part of the body’s methylation process. The level of homocysteine in the plasma is increasingly being recognised as a risk factor for disease. It is also seen as a predictor of potential health problems such as cardiovascular disease and Alzheimer’s.

The complex metabolism of homocysteine within the body is highly dependent on vitamin derived cofactors. Deficiencies in vitamin B12, folic acid and vitamin B6 are associated with raised homocysteine levels. Other factors thought to raise levels are poor diet and poor lifestyle. These include smoking and high coffee and alcohol intake, some prescription drugs (such as proton pump inhibitors), diabetes, rheumatoid arthritis as well as poor thyroid function.

There is no consensus about the upper reference limits for plasma homocysteine concentrations. The ‘normal’ range for healthy individuals is considered to be between 5 and 15 µmol/L. However, levels as low as 6.3 µmol/L are thought to confer an increased risk. Each 5 µmol/L can increase the risk of coronary heart disease events by approximately 20%.

The importance of homocysteine as a risk factor is becoming much more familiar to us. A constantly increasing number of studies have been published that show homocysteine to be a predictor of potential health problems. It is clear now that raised plasma homocysteine concentrations both predict and precede the development of cardiovascular disease including stroke. A study (published in the British Medical Journal) showed homocysteine level in blood plasma predicts risk of death from cardiovascular disease in older people even better than any conventional measure of risk including cholesterol, blood pressure or smoking.

Raised levels of homocysteine are also linked to Alzheimer’s, dementia, declining memory, poor concentration and judgment and lowered mood. Women with high homocysteine levels find it harder to conceive and are at risk from repeated early miscarriage. High homocysteine has also been linked to migraines. Those with conditions such as diabetes and osteoporosis are at increased risk of raised homocysteine levels. Finally,homocysteine has been shown to play a crucial role as a key marker for disease development. It can even determine longevity and health throughout a person’s lifespan.

Why is homocysteine harmful?

Homocysteine is a naturally occurring amino acid produced as part of the methylation process. It has the formula C4H9NO2S and is a derivative of protein that is found in blood plasma when body chemistry is out of balance. A homologue of the amino acid cysteine, differing by an additional methylene (-CH2-) group, it is not obtained from the diet. Instead, it is biosynthesized from methionine via a multi-step process that probably occurs in every cell of the body (Figure 1). 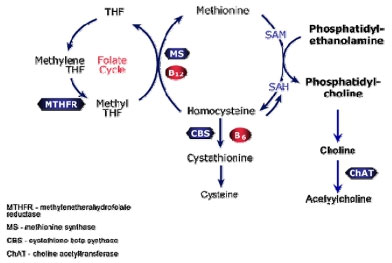 Methionine is an amino acid, ingested as a component of food protein. It is found primarily in meats, eggs, dairy products, fish, chicken, seeds, nuts and some vegetables. Methionine is activated to S-adenosylmethionine (SAM) by the enzyme methionine adenosyltransferase. Circulating levels of homocysteine are usually low due to its rapid metabolism via one of two pathways:

The complex metabolism of homocysteine within the body is highly dependent on vitamin derived cofactors. Deficiencies in vitamin B12, folic acid and vitamin B6 are associated with hyperhomocysteinaemia. Homocysteine can accumulate in the body causing cell damage and the onset of major disease. The reason is because the biochemical transformation process is not working properly, usually due to lack of these needed vitamins. If these pathways are lacking the required vitamins and minerals, dangerous homocysteine levels and potential ill health can result.

The proposed mechanisms by which hyperhomocysteinaemia can cause harm are common to several conditions. For example, vascular damage, cognitive impairment, neurological complications, congenital defects and pregnancy complications

A detailed review of these mechanisms is outside the scope of this article. However, raised homocysteine is associated with damage to the arteries. One mechanism by which homocysteine is thought to cause this damage is by interfering with the way cells use oxygen, resulting in a build-up of damaging free radicals. Oxidation triggers many diseases including heart disease, strokes, cancers and autoimmune diseases.

Reactive chemical forms, such as free radicals, can oxidize low-density lipoproteins producing oxy-cholesterols and oxidized fats and proteins within developing arterial plaques. This oxidation injury, along with changes in nitric oxide metabolism, appears to contribute to the damage caused. Indeed, methylation defects and impaired DNA repair caused by disturbed folate metabolism are suggested to contribute to carcinogenesis.

Nitric oxide is an important regulator and mediator of numerous processes in the nervous, immune and cardiovascular systems, and decreased methylation

Homocysteine also stimulates the growth of smooth muscle cells, causing deposition of extracellular matrix and collagen. In turn this causes a thickening and hardening of artery walls. Overall though, the exact mechanisms involved in the increased risk of ill health with raised homocysteine, still remain a mystery in many respects. More studies are needed to elucidate the exact associations.

Many factors are thought to raise levels of homocysteine. Among these are poor diet, poor lifestyle especially smoking and high coffee and alcohol intake.

Additional factors include some prescription drugs, diabetes, rheumatoid arthritis and poor thyroid function as well as with chronic inflammatory diseases in general, and some intestinal disorders such as coeliac and Crohn’s diseases.

Levels increase with age and higher levels are more common in men than women. Levels can also increase with oestrogen deficiency and with some long term medications, including corticosteroids. Strict vegetarians and vegans may also be at risk as well as people who suffer from stress.

As with cholesterol, family history and genetic make-up can play a part in causing raised levels, as can obesity and lack of exercise. Even people with an active, healthy lifestyle may still be at risk, if there is a family history of high levels of homocysteine or disease.

A rapidly increasing number of variations of the genes that regulate the enzymes that are involved in methionine metabolism have been identified. Reduction in the activity of genes such as the one that regulates the enzyme methyl-enetetrahydrofolate reductase (MTHFR) increases mean homocysteine levels. This gene is present in its homozygous form in about 10% of most European populations. However, the frequency varies widely geographically and between different ethnic populations.

The measurement of total homocysteine which includes the sum of the concentrations of free and bound homocysteine in the blood plasma, is technologically difficult. After blood sampling the blood cells produce and release homocysteine resulting in an increase in measured levels which equates to about 10% per hour at room temperature. Thus it is vital to follow a specific process within 30 minutes of collection:

Collect blood plasma (using EDTA or heparin to prevent coagulation) and then centrifuge the sample to remove the blood cells from the plasma. Even the most efficient transport from clinic or GP practice to laboratory centrifuge rarely renders this feasible. Collection of blood serum is not appropriate due to the relatively long clotting time required. Once separated from the blood cells the homocysteine is stable in plasma for at least 4 days at room temperature, and much longer refrigerated or frozen.

Some manufacturers now provide blood collection vacutainers, which contain a stabiliser solution that can help delay the urgent need for centrifugation.

There are several other important factors to consider when blood sampling. As methionine, ingested as protein in the diet, is the only source of homocysteine, it would be expected that food intake would cause increased concentrations of homocysteine in plasma. Indeed a protein rich meal can increase the total homocysteine levels significantly and so it is generally recommended that the person taking the test should be overnight fasted at the time of blood sampling.

Urine homocysteine measurement is not useful as renal excretion does not seem to be an important route of elimination. Only about 1% of the homocysteine filtered by the glomeruli is normally found in the urine. The rest is reabsorbed and metabolized. In saying that, some GPs do offer urine measurement, as it is easy to collect. However, results should be interpreted with caution as they are only likely to pick up extreme hyperhomocysteineaemia.

The increased need in clinical chemistry laboratories for methods of homocysteine determination, in correlation with cardiovascular diseases and nutritional deficient status, has led to the development of different analytical methods for measurement.

Methods include amino acid analysis, high performance liquid chromatography (HPLC), capillary electrophoresis, gas chromatography-mass spectrometry (GC-MS) and immunoassay. HPLC is the gold standard reference method. Different total homocysteine measurement methods do usually give comparable results. However, there is variation among methods and between laboratories and so caution should be used in comparing values obtained from different laboratories. Studies have shown that single measurements can classify persons with respect to their average plasma homocysteine level quite well. However, due to the inter-method and inter-laboratory variability it is important that any monitoring of concentrations over time should be carried out using the same method and the same laboratory. Choosing laboratory testing services is thus a critical process.

There is no consensus about the upper reference limits for plasma homocysteine concentrations. Among apparently healthy individuals “normal” concentrations commonly range from 5 to 15µmol/L. However, studies on targeted segments of the population have shown that the upper limit of 15µmol/L is far too high in well-nourished populations without obvious vitamin deficiency. It is clear now that each increase of 5µmol/L in homocysteine level increases the risk of coronary heart disease events by approximately 20%, independently of traditional coronary heart disease risk factors. In addition it is well documented that risk for coronary artery disease is represented by a continuum of homocysteine concentrations with a substantial risk occurring between 10 and 15µmol/L. Some report that any homocysteine measurement over 6.3µmol/L represents an increased risk.

There is little doubt that homocysteine measurement will become a routine screening tool for risk assessment in the future, but that current reference limits will change from being based on values from a presumed normal healthy population towards a baseline where ‘normal’ is the optimum level. Overall, the careful monitoring of levels is recommended.

This article has provided an overview of the importance of homocysteine measurement, whilst highlighting some of the limitations associated with sample handling and testing. There will always be people who are at high risk of raised homocysteine, but the only way to find out definitively is to perform a validated homocysteine test, and then monitor levels regularly going forwards.

Dr Gill Hart is a Biochemist with over twenty-five years’ experience in the development and evaluation of hospital standard tests and testing services. Gill joined the YorkTest team in 2005, and has applied her scientific and regulatory knowledge to all YorkTest services.

*Please note that York Test no longer offers a homocysteine home testing kit. If you are based in the UK, please contact us at info@foodforthebrain.org for a list of partners who provide homocysteine testing. Otherwise, please refer to your healthcare provider.

5. Klee, G. “Cobalamin and folate evaluation; measurement of methylmalonic acid and homocysteine vs vitamin B12 and folate”. Clinical Chemistry, 2000, 46:1277-83.

6. Bolander-Gouaille, C. In “Focus on homocysteine and the vitamins involved in its metabolism”. Published by Springer-Verlag, France, 2002, Chapter 3, p33.

9. Mutus, B et al, “Homocysteine-induced inhibition of nitric oxide production in platelets: a study on healthy and diabetic subjects”. Diabetologia, 2001, 44: 979-82.

22. Bolander-Gouaille, C. In “Focus on homocysteine and the vitamins involved in its metabolism”. Published by Springer-Verlag, France, 2002, Chapter 8, p206.